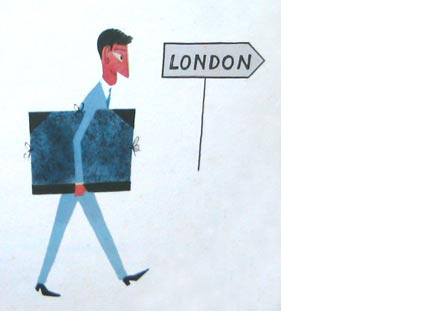 I have to admit that my shelves are very slowly filling with London-related books and booklets. I tried not to do it – but it seems my penchant for illustrated books now includes London ones.

There is something captivating about seeing the city through the eyes of artists – recognising landmarks, vistas and scenes of everyday life. London certainly can look picturesque in reality, but how much nicer to see it re-drawn, re-coloured, re-imagined.

Before I came to live in London in 2000 I already had my favourite book on the city: This is London by Czechoslovakian artist Miroslav Sasek. Sasek produced 18 This is… books and the illustration here is the artist himself. He appeared, in suitably themed attire, on the frontispage of each one. I’m not sure the book made me want to live in London but it conjured up a vision of late 1950s shops, museums, flower sellers and city gents that I have been looking for ever since.

There is still an M. Sasek London to be found. In Mayfair and Piccadilly with their gentlemen’s requisite shops and porticoed clubs. Around Smithfield Market – whilst it waits to be completely gentrified – there is sometimes still a feel of bustle and trade. The French Lycée in South Kensington, with its chattering Madeline’s and evocative baguette emporia. And certainly in the big national museums, which Sasek drew, there is still authentic 1950s dust to be found on exhibits not yet removed to make room for shiny re-developed galleries.

There is a great web site called This is M. Sasek with all his books listed and intriguing bits and bobs on his other work, including early animations of the books. The recent interest in Sasek has led to his books being reprinted, nice editions in the original large format. Meanwhile the originals are hotting up in price on eBay. I found my copy in a suitably drab and damp charity shop in the North West..