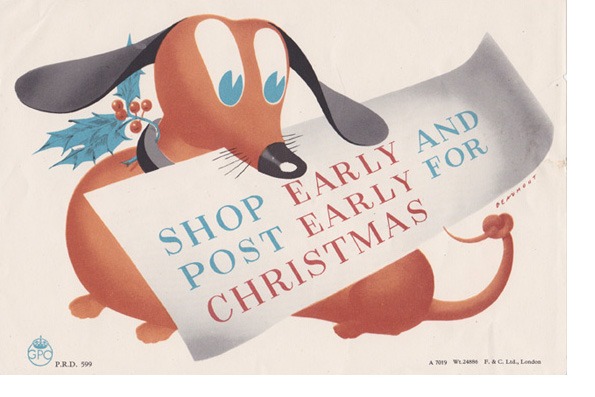 I can’t be collecting posters as well as books and bits of paper. They are too big and wall space is in short supply. But this little beauty is small enough to tuck away at 9×6” or Demy if we are using the nice Imperial paper names.

It is designed by Leonard Beaumont, a Sheffield chap. I leave the real postery-ness to the experts who do it properly. But I do believe this was a counter poster, put just where you could see it when buying your stamps. Wherever he was, this dachshund would be sure to make you remember to post early. The knot in his tail reiterating the message, somewhat painfully.

There is not much info on Mr Beaumont to be found though, except a nice bit of telephony from 1942. Unusually, nothing comes up under his name in a search across London Transport posters, where most commercial artists were earning a design crust in those days.

I also just realised I have blogged Mr Beaumonts work on Shelf Appeal before. He was a design consultant for Sainsbury’s (doing rather nice egg packaging) around the same time he designed this poster in 1950. A bit of design serendipity going on then.

Woof. What a fine dog that is. I think (although I can’t remember the source for this) that these posters were also given out to shops to display in their windows as well.

I’ve also only ever seen him working for the GPO – he did one of their fantastic Lines of Communication posters too.

All of which makes it particularly interesting about Beaumont and Sainsburys – so he didn’t stop designing, just stopped signing things.

It seems that quite a few designers moved from just doing graphics into corporate identiy at about that kind of time, and not just in the UK. It’s exactly the shift that Pieter Huveneers did when he emigrated to Australia – and he was designing GPO posters at about the same time. Also Daphne Padden, Henrion, Schleger.

There is a very good (if intermittent) blog about this shift – here on Henrion.
https://designcoordination.wordpress.com/2011/03/27/design-coordination-corporate-identity/.

I wonder if working for the GPO meant you didn’t get underground design work?

Eckersley did both, but you’re right, most of them – people like Huveneers too – didn’t. I wonder if there is a bit of snobbery at play here, My impression is that LT liked to commission people who were on the borderlines of fine art or illustration, especially after the war. So the closer to being a ‘commercial artist’ you were, the less likely you were to get a LT commission.